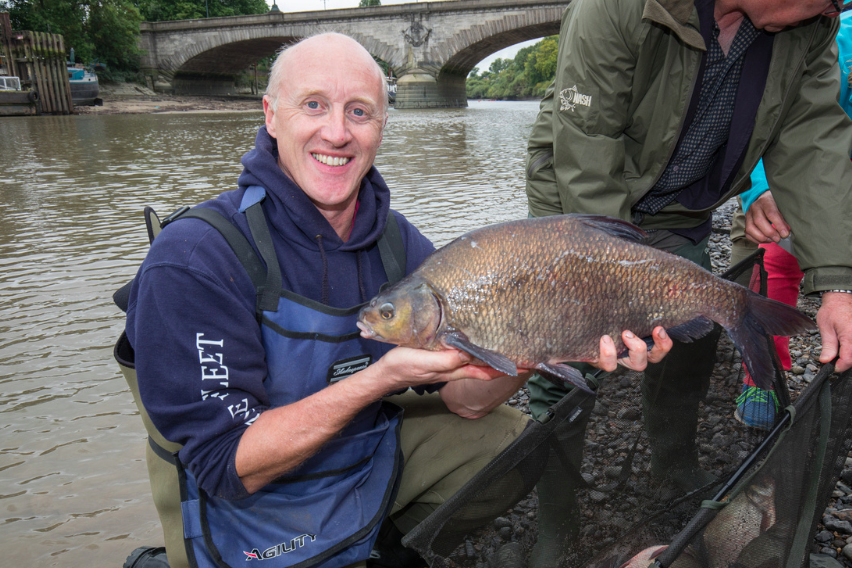 Despite some indifferent weather this year’s Tidefest on Sunday September 10th proved a hit with local people with many events selling out in advance including the foreshore walk at Strand on the Green and the ever popular trips to Oliver’s Island and on the historic Thames launch the Windrush.

50 anglers took part in the Tidefest Angling Championship which saw some good weights of bream taken from Strand on the Green with the winner Mike Smith landing over 28lbs from his peg beside Kew Railway bridge. A small barbel was landed at Chiswick and most competitors caught several eels which is a good sign to see them returning to the river. Once again the seine netting produced a number of baby bass which shows what an important nursery area the Thames has become for this popular species.

Paddleboarding specialists Active 360 ran pre-booked 50 minute supervised sessions for those new to paddleboarding and a ‘Paddle and Pick’ clean-up of Kew Bridge Drawdock in support of the environmental charity Watertrek UK who work to protect waterways around London, and elsewhere, from plastic pollution.

As usual Thames 21 organised river dipping on the foreshore and this year we welcomed Wallace the Wet Wipe Monster to highlight the campaign against plastic pollution being run by our friends at the Marine Conservation Society.

For the first time this year activities took place at on Kew Bridge Piazza next to the One Over the Ait pub which also hosted the Thames Water stakeholder reception attended by local organisations, Hounslow councillors and Brentford and Isleworth MP Ruth Cadbury. These included live music from Duffy and Bird and a demonstration of a Victorian Fire Engine showing how they put out fires in London 150 years ago with the original appliances plus actors in period costume from the London Museum of Water and Steam.

The Museum of London Archaeology (MOLA) Time Truck hosted a rolling drop in demonstration of the Thames Water sponsored Cleaning up History education programme. This innovative activity included hands on education around London’s sewers combined with the thrill of archaeological discovery. There was also be live music, arts and crafts, charity stalls and children’s games.

TideFest 2017 programmes included events at Richmond, Chiswick Pier, Brentford, Barnes, Deptford, Hackney, Beckton, and other locations along the Thames Tideway. The festival is now an established River Thames event which aims to highlight the recreational importance of the Thames to Londoners and encourage people to ‘enjoy the river’. It is part of the month long Totally Thames Festival and is sponsored by Thames Water and Tideway.

TideFest is organised by a coalition of organisations led by the Angling Trust, River Thames Society, and London Wildlife Trust.

TideFest organiser, Martin Salter from the Angling Trust, said: “We are really pleased with the growing popularity of TideFest which is now in its fourth year with a host of new attractions including film shows, talks, live music, river walks and nature reserve visits. It is now firmly established in the Thames calendar and will continue grow with the generous support of our sponsors.”